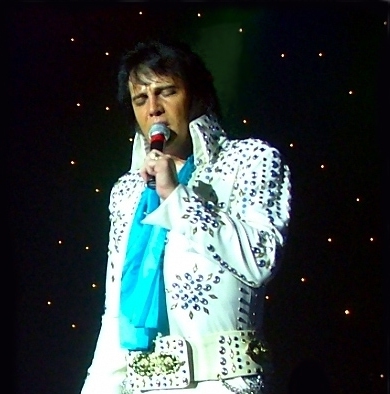 In just a few short years, Shawn Klush has made a name for himself as the country’s greatest Elvis impersonator. This isn’t a position the musician takes lightly, Shawn Klush continuing to tour and perform despite all the fame and fortune has earned over the years.

Shawn Klush was born in Pittston, Pennsylvania. The artist’s father was a DJ and this explains the interest Shawn developed for the entertainment industry at such an early age.

His passion for music was such that Shawn soon began imitating Elvis Presley, his idol. Having heard the icon’s music from a very early age of life, Shawn fostered his desire to follow in Elvis’ footsteps by learning the guitar and joining a band known as Nightmoves.

Shawn Klush stumbled upon his opportunity to achieve his dreams in Montreal, Canada. The artist had spent some time performing in the Poconos region before finally touring Canada and entering the Worldwide Elvis Competition.

Klush won the contest, walking away with $5,000 in prize money. More than the financial benefits, though, Klush also piqued the interest of Legends in Concert’, a widely renowned Las Vegas show within whose halls he spent many a year performing as Elvis.

Every year, Shawn Klush participates in the Elvis Birthday Tribute Tour’, an undertaking within which he performs with Elvis’ own entourage of musicians and friends.

The show has allowed Klush to traverse the country, bringing his love for Elvis and passion for music to fans of the artist all over the nation.

To date, the artist has released 5CDs, boasting music performed alongside other musicians and artists that worked with and personally knew Elvis, this including DJ Fontana, Joe Guercio, Joe Esposito and Jerry Scheff to mention but a few.

Shawn Klush’s renown is best measured by the awards he has garnered over the years. This includes the $25,000 he won at the �Worldwide Elvis Tribute Artist Competition’ where Shawn was declared a grand champion.

Gibson Guitar Co in Nashville was also quite happy to bestow upon him the People’s Choice Award’ for Best Concert Elvis.

The artist’s crowning achievement was being named by BBC One viewers the World’s Greatest Elvis’. Garnering this position with the support of over six million viewers from around the world, one would be hard-pressed to deny Shawn Klush’s place in history as the world’s greatest Elvis Impersonator.

Complement these accolades with additional awards such as Worldwide Ambassador of Elvis’ and Ultimate Elvis Tribute Artist’ and it is easy to see why Shawn Klush has attracted the adoration of so many Elvis fans.